When a spoils system backfires

The new left-leaning majority on the Prince George’s County council is keen to reserve construction work for union firms. But black-owned contractors are often non-union. Did they think this through? [Lateshia Beachum, Washington Post]

Maryland has the nation’s worst emergency room wait times. Why?

I’ve got a new piece at Maryland Reporter on the question.

“You Don’t Have To Yell” podcast on gerrymandering

I joined host Dan Sally last month at the nonpartisan You Don’t Have To Yell podcast for a discussion of gerrymandering and redistricting in Maryland and other states. You can listen here.

A working group of Maryland lawmakers appointed by House of Delegates Speaker Adrienne Jones yesterday recommended that the state repeal its first‐​in‐​the‐​nation Law Enforcement Officers’ Bill of Rights, a law that I and others have inveighed against for years.

Maryland was the first state to pass a LEOBR, in 1972, and by now many states have followed, invariably after lobbying from police unions and associations. Often the bills are sponsored by Republicans, who seem to forget their normal skepticism of public employees as an interest group when uniformed services are involved.

Despite minor revisions following the Freddie Gray episode, the Maryland law retains its most objectionable features, as I observed in a piece this summer, including a five‐​business‐​day “get your story straight” period in which a department cannot question officers after an incident; rules prescribing that the process of investigation and discipline be reserved in general to fellow officers; and a lid on the release of information in which the public is legitimately interested.

As lawmakers observed at a late September hearing, repeal would still leave in place numerous other mechanisms by which police officers charged with misconduct could resist investigation and discipline, including state civil service rules, union contract provisions, and Supreme Court doctrines giving public employees constitutional rights to contest some dismissals.

Definitions vary, but per one 2015 roundup, at least a dozen other states as of then had enacted bills similar to Maryland’s into law, including California, Delaware, Florida, Illinois, Kentucky, Louisiana, Minnesota, Nevada, New Mexico, Rhode Island, Virginia, West Virginia, and Wisconsin. All states with such a law, and the equivalent laws sometimes enacted for correctional officers, should follow Maryland’s lead in considering repeal. And the truly terrible idea of making everything worse by imposing LEOBR rules from shore to shore, a perennial measure championed in the U.S. Congress by such as Sens. Mitch McConnell (R‐​Ky.) and Joe Biden (D‐​Del.), should be buried on the ocean floor, never to rise again.

Invoking its public health powers, Montgomery County late Friday announced that it was banning private and religious schools “from physically reopening for in‐​person instruction” through October 1, no matter what combination of precautions (outdoor instruction, ventilation, small numbers only, masks, distancing) they might have been planning to manage risk.

The move sparked an instant furor in the Washington, D.C. suburban community. Gov. Larry Hogan was among the first to voice criticism, and on Monday he signed an executive order withdrawing from county health boards the authority to order school closings, saying that school districts themselves should make that decision for public schools, and that counties should not force private/​religious schools to close so long as they are operating within state and federal safety guidelines.

I’d been puzzled about why, in its now‐​overturned order, Montgomery County had selected a particular date, October 1, two months out—did that reflect some sort of public health or scientific insight? Then someone pointed out that September 30 is the cutoff date in Maryland to count official public school enrollment. Many real‐​world consequences, including but not limited to the magnitude of state and federal grants, depend on the count as of that date.

Note also that at a press briefing July 22, Montgomery County Public Schools (MCPS) Superintendent Dr. Jack Smith said MCPS enrollment of new students was coming in well below expectations, with only about 300 K-12 new students enrolled as of the beginning of July compared with the more than 2,500 that had been projected by the end of August.

The safety issues here are complex and I don’t know what the right answers are, or whether there is exactly one such answer right for all kids and schools. While Montgomery County and nearby areas have had a lot of success getting COVID-19 transmission levels down, both the local prevalence of the virus and the state of knowledge about transmission and risk change constantly.

But I can see why there’s a problem in leaving an arbitrary power to shut down private and religious schools in the hands of their biggest competitor.

[cross-posted from Cato at Liberty]

I’m in this weekend’s Frederick News-Post with an opinion piece urging the General Assembly to repeal a law that has been central to obstructing police accountability in Maryland, the 1974 Law Enforcement Officers’ Bill of Rights (LEOBR).

Since Maryland adopted its first-in-the-nation law in 1974, it has spread to 15 other states, causing problems along the way. Among states with their own versions of the law are Minnesota, where a video recorded George Floyd’s asphyxiation while in police custody, and Kentucky, where officers’ fatal shooting of Breonna Taylor in her Louisville apartment has sparked widespread outrage….

Don’t let the focus slip this time. LEOBR is designed to result in impunity, and it should go.

An annotated copy of the law as revised in 2015 is here (see also here). The U.S. Department of Justice investigatory report on the Baltimore City Police Department includes discussion of some problems caused by the law. In 2015, before the modest legislative revisions, the ACLU commissioned a report on the law (and the Baltimore police union contract, with which it interacts) from Samuel Walker of the University of Nebraska at Omaha.

Note that police unions in places like Baltimore have negotiated contract provisions that institute some of the same barriers to discipline, or go even further, to the public’s detriment. Because of these provisions, repealing LEOBR would fix only part of the problem. For example, one contract says the city cannot even begin disciplinary hearings while criminal proceedings are pending against an officer. Other contract provisions have provided for disciplinary proceedings to be kept secret from the public, promote expungement of public complaints, or forbid job consequences when an officer is placed on the “do-not-call” list of those whose testimony would be highly vulnerable to impeachment by defense lawyers — although the ability to testify credibly should be one of the prerequisites of a police job. Legislation could help here by restricting bargaining to economic issues, such as wages, rather than discipline and investigation.

The New York Times, together with many other publications, has covered the contentions of Del. Gabriel Acevero (D-Montgomery Village, Germantown) that he was fired by his employer, the MC-GEO union that represents many Montgomery County employees, because he refused to back down from his work on legislation to advance police accountability. More background on the shifting politics in Annapolis from Maryland Matters (citing Sen. William C. Smith, Jr.). More coverage from January on death of handcuffed William Green in Prince George’s police custody (“They deserve justice just like citizens do. They should give prompt statements just like citizens do. They should not be given time to cover up their crimes, which the police officer’s bill of rights was designed to let them do,” says family’s attorney); Washington Post letter to the editor last October on Silver Spring case.

Adam Pagnucco at Seventh State: “The bill [entrenching this Maryland official from removal] is so restrictive that the elections administrator could not be removed from office even if all five members of the State Board of Elections vote to fire her, even if she were convicted of first-degree murder, sentenced to death row and stripped of her voting rights. Only when the state Senate approves a replacement could she be removed. Now that’s job security.”

District 4, we have a problem

As mentioned last week, I’ll be having more to say about the lawsuit filed by Delegate Dan Cox (R-4th), together with Dels. Neil Parrott and Warren Miller and plaintiffs that included business owners and clerics, challenging Maryland Gov. Larry Hogan’s actions in response to the “alleged on-going Catastrophic Health pandemic.” (Maryland Attorney General Brian Frosh has now filed a motion to dismiss in the suit.) In the mean time, however, Delegate Cox has been making quite a stir with his Twitter feed: 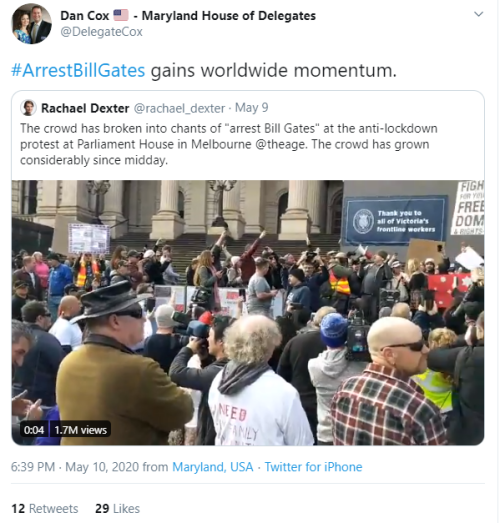 This tweet is spectacularly irresponsible; it’s just shocking. I wasn’t the only one who thought so, either. WTOP picks it up (“Maryland Del. Cox appears to promote Bill Gates coronavirus conspiracy theory”), linking to me and to Republican strategist Frank Luntz (“If you want to be a respected leader, you must lead intelligently. This Maryland state legislator is doing the exact opposite of that.”)

This is only one of a series of dubious pronouncements from Del. Cox in recent weeks. On April 21 he asserted that “Studies show up to 70-86% of the public already have or had coronavirus so of course increased testing will increase cases.” 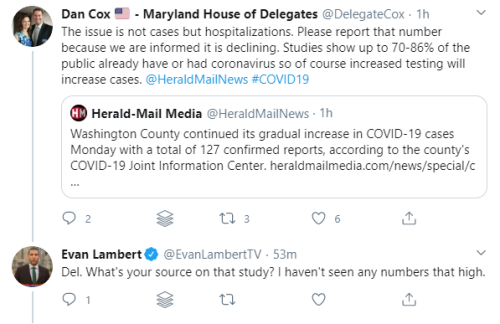 Up to 70-86%? Really? As you can see above, Cox was immediately challenged by reporter Evan Lambert of Fox5 DC, and the following exchange resulted: 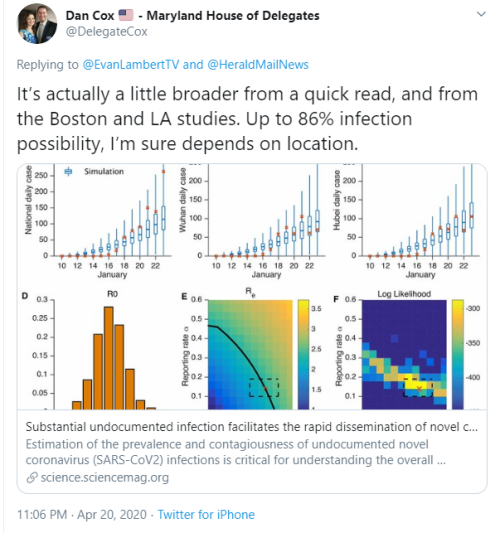 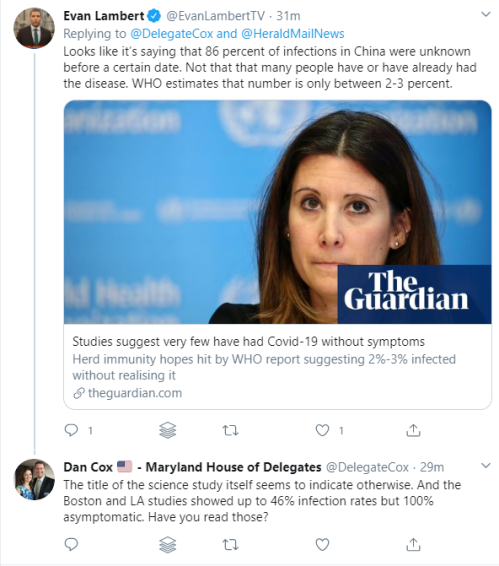 The most charitable interpretation of that exchange is that Del. Cox very badly misunderstood the point of the Science magazine article referenced. Serological studies had already begun to come out then, and have continued to arrive since, indicating that public exposure to the virus is far below 70-86%, and likely in single digits.

On May 4 Del. Cox appeared on WFMD’s Bob Miller show in Frederick, where he said (at 2:00): “we do know that the vast majority, ninety-nine percent of the population, is not in danger with this virus. And that’s the science, it’s not, you know, politics speaking, that’s the science.”

Del. Cox might want to be more careful with the cut-paste button next time, to judge by this excerpt from p. 82 of his complaint. 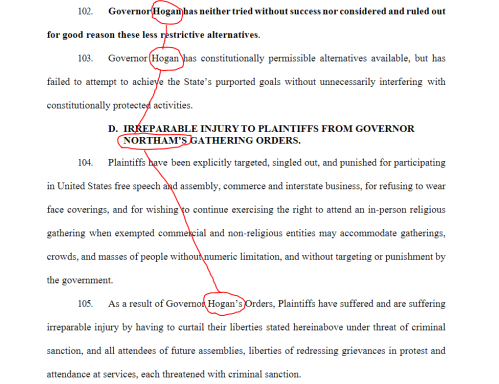 The new complaint is here (more papers); I’ll have more to say about it later. Earlier, I posted in this space about some of my disagreements with Del. Cox’s interpretations of Maryland statutes and of the U.S. Constitution. Yesterday, and not specific to Maryland, I published this article on why most of the public health orders issued against COVID-19 are constitutional — in the view of today’s judges, judges of the pre-New Deal era, and framers of law at the time of the adoption of the U.S. Constitution.

I joined hosts Michael Sanderson and Kevin Kinnally on the Maryland Association of Counties’ popular Conduit Street Podcast, which has a large circulation among civically-minded Marylanders and national reach as well. Our talk ranged widely over legal and governmental aspects of the COVID-19 pandemic emergency, including government’s emergency powers, and how they sometimes don’t go away when the emergency ends; the role of the courts, both during the emergency and after it ends, in enforcing and restoring constitutional norms; contrasts between the state and federal handling of the crisis; and the opportunity this provides (and has already provided) to re-examine the scope of regulation, which has been cut back in many areas so as to allow vigorous private sector response in areas like medical care, delivery logistics, and remote provision of services.

On a special bonus episode of the Conduit Street Podcast, Walter Olson joins Kevin Kinnally and Michael Sanderson to examine the role of state and local emergency powers in the fight against the COVID-19 pandemic.

Walter Olson is a senior fellow at the Cato Institute’s Center for Constitutional Studies. a libertarian think tank in Washington, D.C. A resident of Frederick County, Olson recently served on the Frederick County Charter Review Commission. Olson has also served as the co-chair of [the Maryland Redistricting Reform Commission, created in] 2015.

You can listen to previous episodes of the Conduit Street Podcast on our website.