The Maryland gerrymander case, back for its third trip to the Supreme Court, was argued March 26. This Federalist Society animated video about the case has me as narrator. Jon Levitan at SCOTUSBlog rounds up commentary on the oral argument. The Brennan Center offers an annotated guide to the amicus briefs. [cross-posted from Overlawyered]

A Capital News Service series published at Maryland Matters confirms that in Maryland, at least, bail reform has had trouble meeting its intended goals. In particular, while the number held for inability to meet bail has dropped sharply since the adoption of reforms in February 2017, Baltimore in particular has seen an offsetting jump in the rate at which judges hold defendants without making bail available. Statewide, “the number of people held with bail decreased from 29.8 percent to 18.4 percent over the past 18 months, while the number of people held without bail has increased from 13.6 percent to 22.6 percent.” [Alicia Cherem and Carly Taylor with sidebar by Kaitlyn Hopkins and James Crabtree-Hannigan] I reported on the same trend in 2017 and again last year.

A second entry in the series examines the adoption of pretrial risk assessment algorithms which can make up for some of the lost functions of cash bail, a county-by-county process still under way across the state [Angela Roberts and Nora Eckert] A third looks at the “trial penalty”: numbers show that “defendants who reject plea bargains and are convicted when they choose to go to trial for many types of crimes face longer sentences – sometimes substantially longer – than defendants who make a deal.” [Shruti Bhatt, Angela Roberts and Nora Eckert]

It’s worth remembering that state ventures in bail reform can lead to quite different outcomes depending on the strategy tried. New Jersey, which has won praise for its careful development of pretrial services, “is approaching two years operating a bail system where people don’t have to pay money to be free from jail. The crime wave some warned about hasn’t happened.” [Scott Shackford, Reason; Marc Levin, Real Clear Policy] [cross-posted from Overlawyered]

The rush to spend Kirwan bucks

The majority party in Annapolis is rushing to appropriate a “down payment” of more than $1 billion over two years to implement the lavish spending proposals of the latest blue-ribbon commission on education issues. They’re in no similar rush to implement the Kirwan Commission’s supposed accountability proposals, maybe because those were just pretend anyway, intended as cover for the resource grab. In fact, the same majority party is moving to close down, rather than expand, choice options for parents and families seeking to escape the monopoly system.

The editorialists at the Washington Post have this figured out:

There seems to have been a headlong rush to embrace the commission’s recommendations, with most state politicians swearing fealty to them in last year’s elections. That should give serious pause to Maryland taxpayers. It’s not only that they will be footing the bill with higher taxes or cutbacks in other services. The state’s previous experience also demonstrated the shortcomings, if not outright failure, of increased education expenditures to produce better outcomes.

A previous educational commission, called the Thornton Commission, prompted a historic boost in school spending after 2002. Yet less than 40 percent of Maryland high school graduates can read at a 10th-grade level or pass an Algebra 1 exam. … Rather than simply rubber-stamping a push for massive new school spending, lawmakers should be asking the hard questions of whether Maryland families and children will really be helped.

If only Maryland voters had it figured out too.

There will be also be two additional public meetings, followed by a commission workshop.

* Wednesday, March 20 in Washington County (Hagerstown – location to be determined)

* Commission Workshop (Open to the public to observe) – Friday, March 22 in Annapolis (location to be determined)

Detailed maps are available at the link above, but here’s a screengrab of the line the adopted map would draw across Montgomery County: 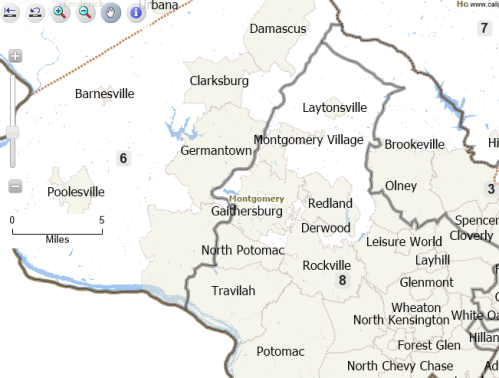 It really is amazing that campaigners for a $15 minimum wage law in Maryland, simply by producing a few business people who take their side, can get the Washington Post to report that the state’s business community is “split” on the issue.

While on the subject, it’s also revealing about the state of coalition politics (and ideology) when a nanny-state anti-sugar group goes to bat for a $15 minimum wage law.